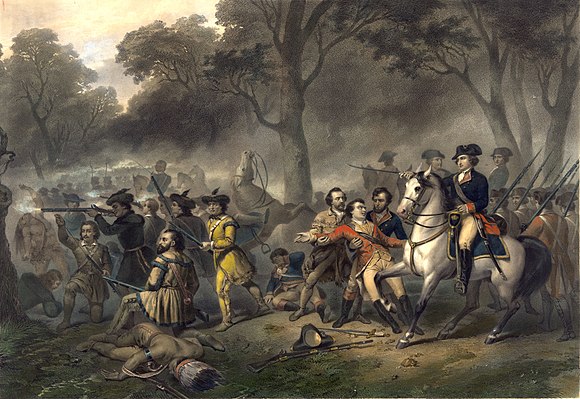 As i was having my who knows how many, (only Odin), cups of coffee today, I felt a hand on my shoulder, and turned around.

I asked him, what are you doing at my house on the 4th of July?

He said, I have noticed your tenacious fight against the enemies of America.
Thats something we have in common.
I believe I actually had it easier.
For all the hunger, cold, neglect from congress while they made themselves, their friends, rich off the misery and blood of my men, in my day, man get to big enough pain in the ass, being an un-honorable yankee puritan ass hole, you could just bitch slap him, challenge his ass to a dual, shoot his yankee ass!

You know, like Cousin Burr finally had to do to that Son of a Bitch, Hamilton!

I said, well, now you are here, I would like to ask you about some of your actions back then.
Not in the war, but afterwards, when you were president.

George shook him head, replied, I know I know!
I was always a better warrior than Statesman.
Thought them sons of bitching spawn of “witch” burning self-righteous, holler than thou “puritan” sons of hypocritical whores had honor, like our kind, but not at all!

I admit it, I got took in, they did me like a mushroom, fed me full of shit, and kept me in the dark.
Thats not an excuse.
It’s just that I was old, I was tired, I was sick, I was nearly deaf, I simply was not up the job.
I should have just gone home after the war, spent time where I really wanted to be, Mount Vernon
Try to guide America from there, gently as one would a child one helped give birth to, let some other sucker be “President”.

I interrupted him.
Asked, say, can I write our discussion up in my blog after you leave?

Not trying to hurry you off, theres a lot of questions I have about these times, some of peoples actions.

Cousin George answered, Sure thing!
I been reading some of your skewering of some of these scum sucking political whores in Sodom and Gomorrah on the Potomac, and I think you are holding back too much, being way to gentle!

Yes but them cowardly yankee puritan scum, passed laws saying you can not bitch slap their lying, cowardly mouths, challenge them to Trial Before Odin, On the Field of Honor.
Can’t make them back up their lying cowardly mouths anymore.
They passed laws saying they can lie like the sons of whores they are, be a smart ass about it, without getting bitchslapped, shot or having a sword run through where they had no use for it.

George said, thats why I said, some ways I had it easer.
That YouRube, promoting Anti- American, pro zionist zombie virus bull shit, kicking anything truthful they can find off.

I saw they kicked you off.

Yeah I said, I knew it was coming, not that anything I put out there was a lie, it is just I tell the truth, cause the truth works better than a lie.

A lie may be honey to coat some bad crow one has to eat, but it don’t change one ate crow in the end.
Said, I think the worse thing I did, was sing a song of Southern Pride, with a Confederate Naval Jack in the background, it got 41,000 plus views, people were leaving comments, some yankee smart asses doing what yankee smart asses do best, run off with diarrhea of the mouth, without engaging their brains first.
But mostly positive things about the Confederacy, from all over the world.

I got banned cause they said they simply were not going to put up with someone like me, telling the truth and proving their lies to be not only lies, but DAMNED LIES!

Course I had to run what the lying zionist speak ass holes said, through my “zionist Translation Rule #1′, to get what they really said.
Just flip the implied meanings of their lies 180%s.
Night becomes day, day becomes night, up becomes down, down becomes up, pedophilic puritan yankee spawn becomes “honorable freedom fighters”, And honorable Confederates become “treasonous war criminals”.

Yes George said, reminds me of Alexander Hamilton, the Son of a Bitch!!

I asked George, I seem to notice some animosity every time Hamilton’s name comes up, I mean I know he was an evil ass hole, using Voodoo Usury economic numbers you did not under stand, but what is your personal considerable disdain rooted in.

George replied, because he was an evil ass hole, using Voodoo Usury economic numbers I did not under stand, a lying Son of a Bitch, who I trusted when I should not have!

But let me ask you George, why the hell did you send that “federal” army, to make men who fought under you for freedom, to become slaves again, just to Washington DC this time?

I made a real bad decision there, I screwed up ROYALLY!

Hey, I said I was better kicking ass then herding ass holes!

That Son of a BITCH HAMILTON, lied to me, and I got taken in.
I do have to admit a bad taste left in my mouth from the cowardly ass holes kept deserting, every time things got rough, the ones stayed at home safe in their beds criticizing me for ever damned battle lost, when the whores in congress, would not provide my men with sufficient any damn thing!
I felt the two faced sheep people, and their leaders, did not deserve to be self ruling, as they would desert, turn on you, stab you in the back, given half a chance, for some perceived benefit!

I Screwed the Pooch!
I admit IT.

I can tell you this, the decision I made to back the slave of Americans making document, the “constitution”, and sending that army against the veterans, were two of the three things weighed heavy on my heart, as I lay dying, realized i could not fix what I had done, to my shame.

What was the third I asked?

Not BITCH slapping Hamilton across the lying mouth, shooting or sticking him with the Sword of The Úlfhéðnar, through his black lying heart!

It was my job, cousin Burr had to do it, and the fickle American sheep People turned on him for helping them.
Damn Sheep!

Hey I said, I was going to ask you what you thought about the sons of bitches in Sodom and Gomorrah on the Potomac, murdering cousins Lt Col. John Washington, CSA, and General George S Patton?

Don’t get me started on That Today!
I will come back for another visit, we can discuss more things, go in-depth to those murders also by the USA/DC.

I asked him, do you remember my 3ed great grandfater Carleton who was with you three years, at Valley Forge with you?

He answered yes, you can be proud, he was no Sun Shine soldier.
He was an all season soldier.

But right now, I have to run.
It is the 4th of July, and I still have many stops to make.
I still have to go piss on the Son of a Bitch Hamilton’s, the no combat coward, politician in a uniform, Eisenhower’s, The Red Bolshevik mass murdering Stalin loving communist FDR’s, the A Bomb dropping Truman’s, the queer manic depressive, lying, black hating racist atheist Lincoln’s, the Drunk Grant’s, the criminally insane sadistic Sherman’s, the zionist Israhell whore LBJ’s The pedophile George Bush’s, the Usury banker blow job giving Woodrow Wilson’s graves!

I poped to my feet at attention, threw him a proper salute.

He casually returned it and said, we will continue this interview again soon.

I asked, who’s grave is first.

With a smirk he said, I ALWAY piss on Hamilton first.

I said, I just put coins with them on em in a fancy brass pot I bought at a thrift store, piss on em every time I get a chance.

He laughed, said keep up the good work boy!

And he was gone as suddenly as he appeared.

I find myself looking forward to our next visit