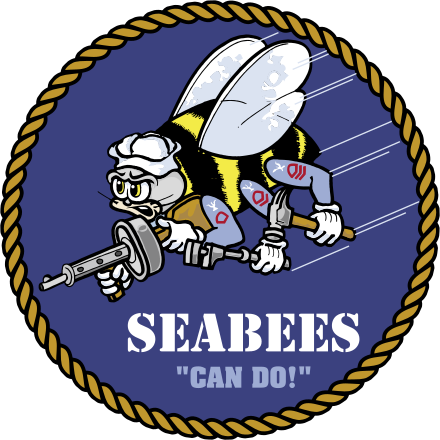 First off, there is a reason they use the term, “Cuss Like A Sailor”.

Secondly, i am not a sailor, but have been accused of it a few times.

i was a SeeBee!
Just because that tag on the uniform said US NAVY, some them swabbies would get confused and think we were the same as them.

Now you non navy folks, going to need a bit of an exclamation of the difference between a sailor and a SeaBee.

Sailor, needs to get across a bit of water, he gets a bunch more like him, and they get on this boat and sail across the water.

They insist on calling them boats ships.

You know the saying about the difference between a man and a boy, is the size of their toys.

Now, if a SeaBee needs to get across a bit of water, he just walks across, cause SeaBees walk on water.

If you don’t believe me, ask any other SeaBee.

SeaBess don’t like to show up the other services so called construction organizations too much, so sometimes they will just build a bridge across the water, and drive across.

But thats another story.

This one is about the night before my group got on our magic carpet which would fly us into the Arabian night!

We were sitting at the Norfolk Naval Base, waiting for an Air Force C-141 to whisk us away to that big kitty litter box.

This was still Desert Shield, the buildup to war, but the flying fleets, and the sailing fleets, were busy as a one legged man at an ass kicking contest.

Took three days to get there past promised time.

But at last the brass gave us assurances the Air Force had assured them, we flew out tomorrow.

There was this NCO club called the Tradewinds, on the base.

Group of us went down there, to make sure we were good and hung over when we flew out.

Working up to last call, this one E-5, and three of us E-4s, started buying double, sticking them in the girls purses and our Pea Coat pockets.

After last call, the E-5, we three lowly E-4s, and an E-6 who was trying to see if he could keep us out of trouble, went strolling arm in arm, around the mostly deserted streets and sidewalks of the Norfolk Naval base, singing, drinking, throwing beer cans on top of the manicured shrubbery, proceeding to get blind stinking drunk.

The E-6 kept trying to tell us if we did not quieten down, we were going to get into trouble.

Slurring our words, one of the females and i at the same time, told him the same thing.

What the fuck they going to do, send us home, not let us go to Saudi?

i further explained to him, we held front row seats to a war, and other than maybe an ass chewing, no matter what the hell we did this night, short of rape, robbery or murder, was going to keep our little insignificant asses from being on that plane in a few hours!

So we partied until the beer ran out, stumbled to our racks, got up in a few hours, and flew off to war.

The E-6 was just doing his job, herding unruly lower level Seabees, trying to keep em out of trouble.

Same damn thing i did in many foreign countries when i became an E-6.

Like that time i did Shore Patrol in Korea.

Or that time in Thailand, and many others.

Or the time i herded that bunch of E-4s safely back across the Mexican border,with out ending up in a Mexican Jail, after a whole day of drinking and seeking out boy shows, and feminine company.

Now i was a married man, and did not partake of the feminine company.

Which is probably just as well.

The one tried to get me to pay for “her”, when “she”asked why i would not go to the room with “her”, told “her” i was married, had a wife at home.

But thats another story!